On June 5, Kate Spade, a famous American fashion designer, reportedly took her own life. Only a few days later on June 8, Anthony Bourdain, a celebrity chef and author, died by suicide, 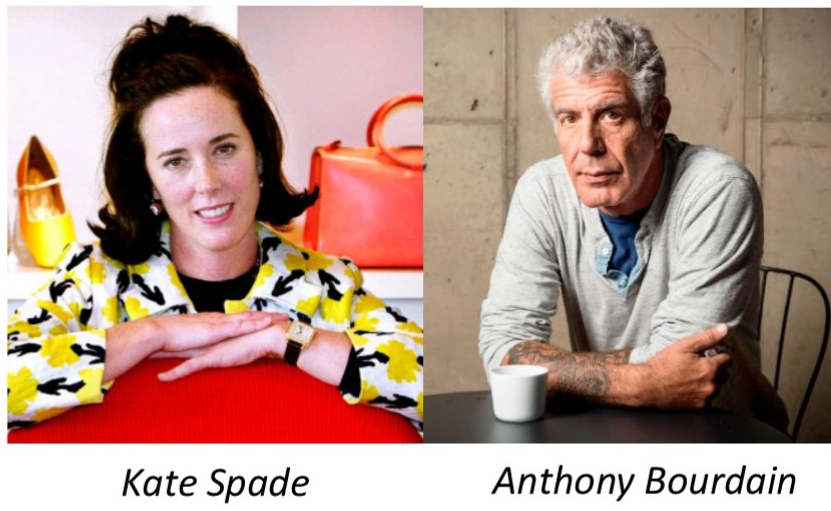 too. And, on that very same day, the Centers for Disease Control and Prevention (CDC) released data suggesting that suicide rates have increased by nearly 30% since 1999.

There have since been an array of responses. The New York Times suggested that one of the biggest contributors to the suicide rate is the lack of gun control. Seasoned journalist, Rob Wipond, used a CDC chart to compare the rising rates of suicide with the rising prescription rates of those drugs classified as antidepressants. (He found that the two closely mirrored one another, which you can see by clicking here.) Meanwhile, Felice Freyer at the Boston Globe (not a member of the Boston Globe’s ‘Spotlight on Mental Health’ team!) took one of the more nuanced view, noting that suicide rates often go up among those who are experiencing financial or   relationship crises, and/or problems with substances.

However, on the whole, most media outlets (and individuals) are drawing the same old link between suicide and psychiatric diagnosis. They are saying the cause was “depression”, ignoring that for most people that is an incomplete answer (at best) that ignores the very real struggles many individuals are facing. They say the solution is “treatment”, disregarding that many people who kill themselves are in treatment and that it doesn’t seem to be helping (as evidenced not only by their individual stories, but also by the CDC’s report and other research that tells us important facts like that hospitalization appears to lead to an increase in the risk of someone making a serious suicide attempt).

By looking for such simplistic explanations and solutions, we miss the opportunity to do what’s truly needed: Make real change in how our society regards death, suicide, and the best ways to support one another through our darkest moments. On June 9, Clinical Psychologist, Noel Hunter, released an article, “Rising Rates of Suicide: When Do We Acknowledge that Something Isn’t Working!?” What follows is an excerpt from her piece:

“Telling a person they are “ill” for suffering or being sad serves to further alienate the individual. It often results in the person feeling defective, and puts the problem inside the individual instead of recognizing that cultural and circumstantial factors are a problem. Studies have demonstrated over and over again that a biological illness perspective on human suffering leads to decreased empathy, increased desire for social distance, and increased prejudice and discrimination.

Worse, this focus on mental illness and individual suffering can sometimes lead those who are diagnosed to develop a lack of responsibility for how one treats others, lack of empathy for those not seen as sick, and a preoccupation with one’s internal state to the detriment of connection with others. Internalizing an illness explanation for one’s suffering leads to alterations in identity, reinforcement of abusive dynamics, decreases in hope and self-esteem, and decreased likelihood of seeking help.

In other words: we, as a society, are being told that if someone is suffering, the correct approach is to convince them of ideas that will likely lead them to feel marginalized, helpless, hopeless, worse about themselves, ashamed, retraumatized and less likely to reach out to others for connection and support when, in fact, connection and support are the very things most likely to heal. Logic at its finest.”

We would do well to look at what the evidence and people’s stories are truly telling us and work together for change.

“Although heavily promoted by the medical profession and drug companies, there is little scientific evidence to support the claim that depression is a genuine medical illness that causes suicide… The great disaster of this myth is that once the professionals assume that depression is the cause rather than just another symptom, they then look no further.”