Protest at the Courthouse! 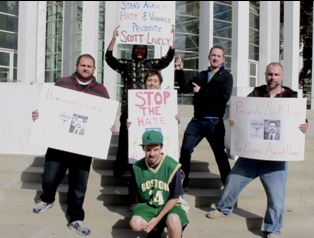 Equipped with posters produced at the Bowen Center and an organizational effort led by the GSA (Gender Sexuality Alliance), the RLC’s presence was strongly felt at Springfield’s Federal Courthouse on the morning of November 6th.

We joined the protest alongside community members from ARISE, Out Now, Stop The Hate And Homophobia Coalition, and the LGBT Asylum Support Task Force, standing in solidarity behind SMUG (the Sexual Minorities of Uganda) in their discovery trial against Scott Lively. For those unfamiliar with the case, Scott Lively is a Springfield native who has travelled abroad to Russia and Uganda, helping lead the movements in anti-gay legislation and even calling for violence against homosexuals. SMUG has brought charges of Crimes against Humanity against Lively and we now know that the trial is set for 2015.

More information on the injustices and the protest are available here: