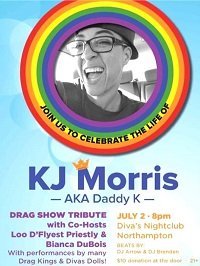 On the early morning of Sunday, June 12th, 49 lives were lost at Pulse nightclub in Orlando, Florida, to an act of devastating violence. This terrible act was targeted at people in the LGBTQ* community, many of whom were also people of color, and all of whom had come together in a space that they thought was welcoming and safe.

This tragedy has affected our own community greatly, and our hearts go out to all who lost someone. There have been several opportunities since the 12th to gather, grieve and speak out against this and other such terrible acts. Another community opportunity will take place on July 2, 8pm at Diva’s in Northampton, in honor of KJ Morris, who only recently moved from Western Mass to Orlando and was one of the 49 lost.

Although this event was not organized by the RLC, we wanted to make sure to share the information. The event is 21+. A $10 donation is requested at the door.

Proceeds from this fundraiser will go to the family of KJ Morris.