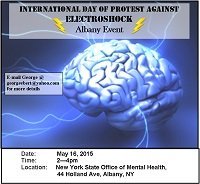 Many people who have experienced Electro Convulsive ‘Therapy’ (ECT, also known as Electroshock) have reported a variety of negative impacts, from memory loss and other cognitive damage, to loss of personality and so on.

Perhaps even more importantly, many people report not having been provided with accurate, objective, and complete information on the potential harms and risks of ECT before they consented to receiving it.

Still others report providers being quick to suggest ECT (rather than using it as a last resort) and/or having ECT forced on them through the same mechanisms used to force medication.

May 16 has been called an international day of protest. Mindfreedom International, Psychrights.org and many other organizations and individuals are joining together to demand that this practice (both ECT itself and how it is currently being used) be changed. 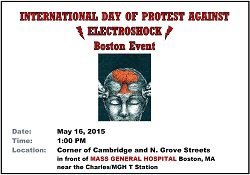