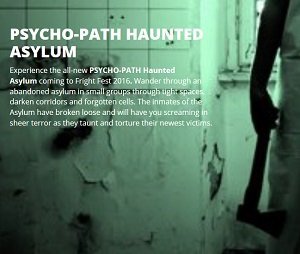 Six Flags New England will be premiering their ‘psycho-path haunted asylum’ this fall.

This haunted house perpetuates the worst stereotypes of what it means to have a
psychiatric diagnosis or to receive support to get through a period of deep emotional distress.

“Experience the all-new PSYCHO-PATH Haunted Asylum coming to Fright Fest 2016. Wander through an abandoned asylum in small groups through tight spaces, darken corridors and forgotten cells. The inmates of the Asylum have broken loose and will have you screaming in sheer terror as they taunt and torture their newest victims.

This haunted house is not only insulting and hurtful, but quite literally dangerous for all the terrible myths it re-enforces about the links between violence and people with psychiatric histories. (See this article, ‘Gun Violence verses Psychiatric Diagnosis‘, for more on that myth.)

We are calling for immediate response from the community.

Although further action may be planned, at the moment, we are asking people to contact Park President, John Winkler, at the following address to request that the Aslyum exhibit be cancelled:

Any written communications may also be copied to the Six Flags corporate offices: